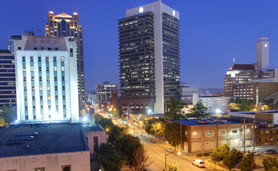 This 2010-2011 project involved milling-off old asphalt, and installing a new 1.5” asphalt overlay, for many of the Birmingham city center’s most-traveled roads.

Traffic control was a major challenge for this project—particularly given the tremendous weekday demand for Off Street parking, which serves both area businesses and the UAB campus. The area is also home to several hospital and emergency facilities—all of which, naturally, remained open 24/7 during the project.

Schedule updates were distributed weekly to Birmingham’s City Engineer and UAB—as well as to the hospitals and emergency facilities.

In order to minimize disruption of peak downtown traffic periods, Dunn was required to eliminate four daytime hours from its weekday paving schedule (6:30 to 8:00 am and 4:00 to 6:30 pm). For traffic control, Dunn coordinated with local law enforcement—whose time investment toward the effort exceeded 12,500 man hours.

Despite all these challenges, the project was completed within the contract duration—in April 2011.